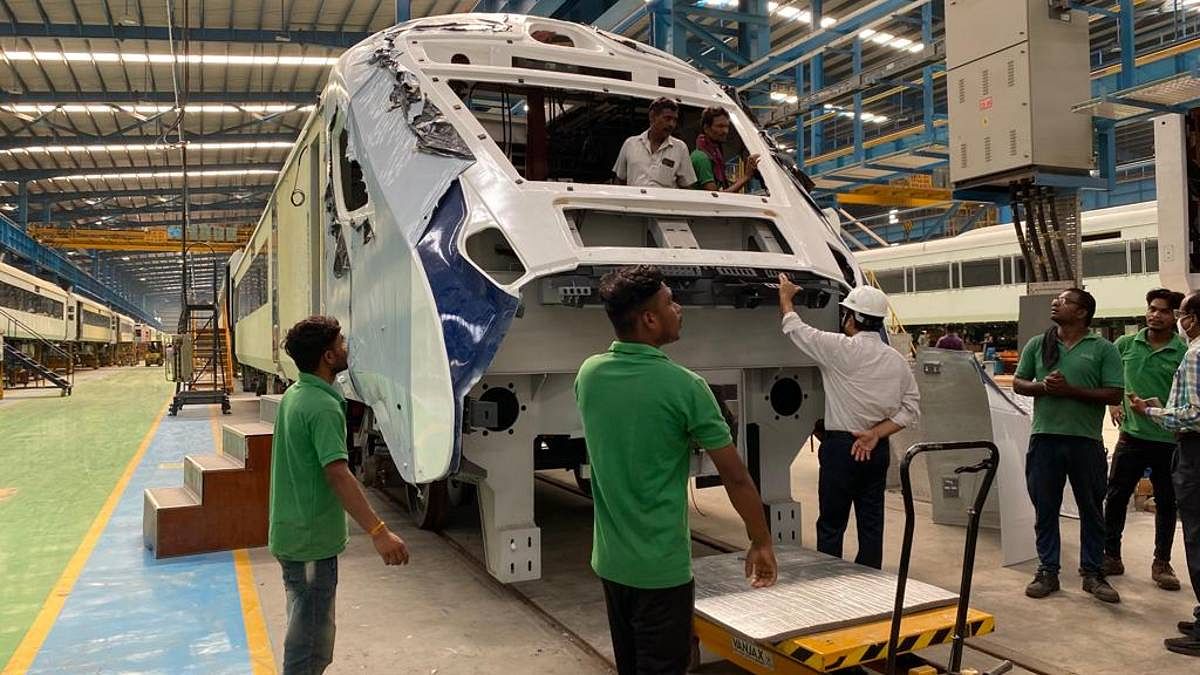 Chennai: Gigantic machines of various shapes lift, cut and weld stainless steel sheets, electrical wires and other components that go into making a train – assisted by men and women in blue overalls, yellow helmets and, in some cases, thick gloves. Sparks fly from time to time in one of the workshops where men with their faces covered in welding helmets work.

On another floor, sheets of stainless steel are fed into a computerized laser cutting and welding machine, which has been programmed to cut the edges of the sheet to specification. The sheets are then welded – two at a time – to join them together.

A constant hum fills the air, faint in some places and intense in others.

The hum and buzz inside the workshop contrasts sharply with the lush green surroundings outside the factory located in Perambur, the industrial hub of Chennai. Among the largest and oldest coach manufacturing factories in the world, ICF produces more than 4,000 coaches per year, with 50 different types, including the Vande Bharat Express.

As the hype unfolded after the fourth Vande Bharat Express, linking Una in Himachal Pradesh and New Delhi, was reported on October 13, ThePrint went to ICF to see what’s going on in the making of the train. And what the men and women of the factory need to keep up the pace, to work in the heat and noise.

Since the launch of the first Vande Bharat train in 2018, three more have become operational: New Delhi-Varanasi, New Delhi-Katra, Gandhinagar-Mumbai and Amb Andaura (at Una)-New Delhi.

ICF Chief Executive Officer (GM), Atul Kumar Aggarwal, told ThePrint that although this is a very difficult goal, he is quite sure that they will be able to achieve it. . “We are confident and our team is working 24/7,” he said.

Currently, about half a dozen Vande Bharat trains are in production at ICF.

Sudhanshu Mani, the former Managing Director of ICF during whose tenure Vande Bharat Express – then known as Train 18 – was conceptualized and executed, said: “Now that ICF has already developed four trains (Vande Bharat ) and figured out the process, they can easily deploy three to four trains a month and about 40 by August 15 next year, which I think is a good number.

What goes into making a semi-high speed train

At 130-132 kilometers per hour (km/h), traveling on a Vande Bharat is a smooth affair. The experience you get inside is also different from regular trains. Spiffy, with swanky amenities, hot cooked food, and neat attendants – it’s similar to a flight experience.

But it takes painstaking work over eight weeks to put it all together, from the train’s chassis to its deployment.

The chassis – in normal parlance the frame – is 23 meters long and is the train’s most critical component, supporting all of its structural load and overhead equipment, such as battery boxes, bio toilet cisterns, etc. .

ICF procured the chassis and other components that go into making the body of the car from different vendors across India, transported them to Chennai and assembled them in the workshop here.

Propulsion equipment, for example, has been contracted to Hyderabad-based Medha, an ICF official said.

Additionally, each car has two side walls, two end walls, and a roof, all made of stainless steel, one of the essential components in train manufacturing.

“The chassis is then placed on a heavy machine called a body assembly jig. This is where the chassis, side walls, end walls and roof are all integrated,” explained S. Srinivas, engineer Chief Mechanical Officer (PCME).

The structure is then removed from the template and placed on the bogies. “Now the basic skeleton of the train is ready,” he added.

The next stop is the specialist paint booth, where the car body is painted – first with polyurethane paint, then with nano paint.

Srinivas says there is a reason why nano paints are used. And it’s not just for shine. “We call them anti-graffiti. Even if you use a marker, it can be wiped off with a normal cloth. It is very easy to clean the train. A nano layer actually protects. So the shine is retained for a very long time,” he said.

Painting is a tedious task and takes between five and seven days.

Once the painting is finished, the skeleton of the train is taken to the furniture factory. This is where all the furnishings, including the flooring, are made.

For the flooring, again, a special wooden material called makore plank from Madhya Pradesh and Maharashtra is used. While the base floor is made of steel, the makore floor is laid on top of it.

“This is done because it absorbs noise and vibrations. It acts as a smooth cushion when the seats are installed,” Srinivas said.

Above the makore panel, a third layer of PVC flooring is made for aesthetics.

Now the train body is ready for the crucial electrical wiring. “Cabling is a very, very extensive and critical process. The wiring is done for air conditioning, there are a lot of communication cables, power cables, etc. said Srinivas.

Another important activity, the official said, was the signage inside the coaches. Fiber reinforced plastic is used to make the panel.

Attaching the seat is the very last activity.

The coach is then electrically tested to see if all systems are working properly.

“Then the four coaches are brought together and tested again at train level. We test to see if when a command is given at one end, it goes to the other end. All functions are checked at the trainer level, at the base unit level, and then at the train level. Then a race test is carried out at the yard at a speed of 15-20 km/h, to see how it performs,” Srinivas said.

It is at this point that the rail safety commissioner comes into the picture and gives the green light for the deployment of the train.

About 80-85% of the components that go into making the Vande Bharat train are indigenous. Among the main imported components are wheels and electronic components such as chips.

What keeps the pace

The people involved in making the train come from a variety of backgrounds. Sasi Kala, 35, a graduate of Madras University, works in the bogie section of the ICF, where Vande Bharat bogies are assembled. She has worked here for six years, after completing her Masters in Commerce.

“It’s tiring, but I like it. It’s not just Vande Bharat. I’m very proud every time I see a train I’ve worked on running. You forget the toil and the sweat,” she told ThePrint.

In the workshop, there are many others who think the same way.

Kala is part of an all-female group mahila shakti team working at ICF, where women make up around one-tenth of the 9,086 workforce.

But not everyone works on the Vande Bharat Express, which does not have dedicated staff. “They (staff) keep doing other things too because in ICF other coaches are being trained as well,” Srinivas said.

Former ICF Managing Director Mani said he was pleased with the success of the Vande Bharat Express.

“A baby you delivered with your team at ICF has finally come of age and every train is inaugurated by the Prime Minister himself. He, and indeed the people of India, see him as a symbol of ‘India reborn. We have just made a train, but it has become cult because of the commitment and sense of purpose shown by the ICF team,’ he said.

But challenges remain. The first is to run the trains at their full potential speed of 160 km/h. Currently, there is no infrastructure to support such speed.

“To make it work to its full potential, one thing that is absolutely essential is fencing. Unless you have a fenced track, the Chief Rail Safety Commissioner will not give you permission to drive at 160 km/h because the impact at that speed could be very damaging,” Mani said.

Although talks to upgrade the tracks have been underway for more than a decade, the railways started work on it only a few years ago. “Once that’s done, you can run the train at 160 km/h, that’s its full potential. Otherwise, you can run it at 130 km/h,” Mani said.

Make sure that pests cattle not wandering on the slopes is another big challenge.

Currently, the Vande Bharat is a 16-car trainset. But in the future, the ICF plans to do longer trainings, especially for sleeper coaches. “The sleeper train class is the next version of that. We are working on it and you will hear from us soon,” said the ICF Chief Executive.