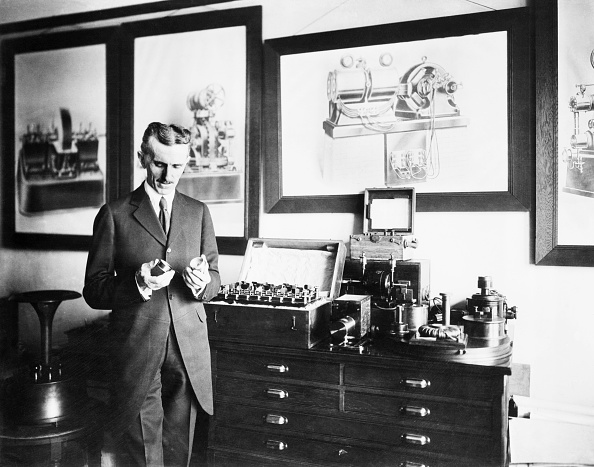 Nikola Tesla is a genius in every sense of the word. He’s probably always been the smartest person in every room he’s in – perhaps too smart for some people to consider him scary.

(Photo: Getty Images)
Serbo-American inventor and discoverer of magnetic field rotations leading to the use of alternating currents in electrical machines and the induction coil known as the “Tesla coil”.

And if you take a look at several of his craziest unbuilt tech, you might even start to think of him as a comic book supervillain, as they are indeed insanely advanced for his time.

Yes, you read that right. If you didn’t know it yet, Nikola Tesla was one of the first to dream of a real death ray – or at least that’s what some believe.

His words to the press were, according to History.com: (this weapon) “would bring down millions of armies in their tracks.”

In a New York Times headline from 1915, these words were pasted: “Tesla’s New Device Like Thor’s Bolts.” But according to ScienceHistory.org, his device wasn’t really producing lightning. Instead, it would project a beam of metal ions at a blistering speed of 270,000 miles per hour.

The iconic inventor called this weapon “teleforce”, though it would only get its eventual nickname “death ray” from the press until he proclaimed it could accurately bring down enemy planes. at a distance of 250 miles, writes ScienceHistory.org.

Remember when Tesla proposed his so-called Death Ray, the world was in the middle of World War I (although the United States would not go to war until two years later) .

For now, maybe you should be thankful that Nikola Tesla’s death ray was never invented, based solely on the power he claimed to have. And maybe be thankful the man never went into supervillain mode with that gun in tow.

It is impossible to create and maintain an earthquake on command, is it? Well, apparently not for Nikola Tesla – if firsthand accounts of this event (and machine) are to be believed.

In 1898, Tesla reportedly rocked his lab at 48 E. Houston St. in New York City hard enough that neighbors were forced to call the police and an ambulance, writes Forbes.

The machine with which Tesla allegedly produced a man-made earthquake was called a “resonator,” and a 1912 article in The World Today magazine apparently described it shaking a ten-story building on Wall Street. What’s even crazier is her alleged size: it was said to be small enough to fit in a coat pocket.

Other onlookers were quick to say that if the famous inventor had had a few more minutes with his resonator, he might have been able to “bring down the Brooklyn Bridge in less than an hour.”

Much of Tesla’s inventions seemed strange for the period he was in, such as the transmission of electricity wirelessly. But maybe this one would seem odd regardless of the time period: a thought camera.

Speaking to reporters at the Kansas City Journal-Post in 1933, he said these words:

“A definite image formed in thought must, by reflex action, produce a corresponding image on the retina, which could be read by an appropriate device.”

The device Tesla talks about will be able to “illuminate” those same thoughts and have their picture taken, according to InterestingEngineering.

But his theories, although shifted in a way due to established research into how thought processes work, still cannot be ruled out as there is so much more left about the human mind that is not fully understood. . So maybe, who knows if the inventor was up to something?

Just imagine the possibility of literally photographing what your friend or loved one is thinking right now. Someone with bad intentions could use this technology to gain wealth, influence, and power.

If this tech doesn’t scream comic book villain, then nothing will.

Associated article: Elon Musk admits he’s not the ‘biggest fan’ of Nikola Tesla, the man behind his brand of car

This article is the property of Tech Times

2021 TECHTIMES.com All rights reserved. Do not reproduce without permission.

Tiny living machines called xenobots can create copies of themselves