The tunnel boring machines are the same in the AVE, the highway or the different metro lines of the main cities of Spain. These large machines are the most important infrastructure heroes and represent one of the biggest expense items in a variety of projects. centimeter to centimeter and with exorbitant maintenance and operating costs, they lead and ensure with a technology that has evolved very little in recent years. But that may be about to change.

EarthGrid, a company based in the San Francisco Bay Area, California, presented the development of a Plasma drilling robotThis method promises to be much faster and more efficient as it does not require cutterheads or a rock wearing front wheel section or complex belt systems to remove residue from the excavation face.

As the company indicated, they could Tunneling 100 times faster and 98% cheaper Compared to traditional tunneling methods. It is expected to be able to use this technology in the construction of pipes for electrical networks, the Internet and all types of public services in the United States.

“Imagine a robot with 10 lightsabers on its front end, evaporating from rock and soil,” explains EarthGrid founder Troy Helming in an explainer video posted to YouTube. The system uses a plasma created from electricity and airflow, which consists of columns They reach up to 27,000°C.,

Earthgrid calculations estimate that the speed of Up to 1 kilometer per day by evaporation and spallation, The latter is the dissolution of rock into small pieces under mechanical stress. In the case of the plasma system, due to the very high temperature which can break the chemical composition of the minerals that compose it.

starts with technology 3 and 30m. vertical excavation between, as indicated. To avoid other types of conduction which may be affected by the plasma method.

Rapid Excavator Robot (RBR) is a series of Plasma-emitting tubules are arranged in the head Following a Fibonacci spiral, starting at the center and widening to cover the entire diameter of the front of the excavation, according to new atlas,

A large diameter RBR. diagram of

This process involves turning on and turning on all the tubes at the same time. Swirl the head for full coverage, Helming explains that a possible prototype could carry 72 plasma torches to drill 1 meter in diameter; Power consumption of 500 kW for each of them and a total of about 40 MW in low-cost mode. If you need more power because the rock is hard, you can supply 120MW continuously.

For larger excavators, such as a mobile conduit, the system will need to be connected to a motorized vehicle. Earthgrid Solution a. employing Tracked machines that support the weight of the cutterbarWhich can be managed remotely and which manages all the necessary energy.

What They never mention the stabilization of the tunnel, Traditional tunnel boring machines have a system that applies a single piece of precast concrete over its entire diameter to ensure excavation and prevent landslides. They also don’t comment on how well the plasma works with the myriad of water-filled cavities that grow in the tunnels.

The scalability of the system together with the calculations of the company’s engineering team ensure that the machine can consume 1.38 GW at an advanced stage. Although this is not the limit, it is far from the case. can be designed much more powerful plasma generators or pair some robots with others – with each larger spiral – to get the job done even faster.

“We are very cheap because Operating expenses are very low”They comment on the web. Mainly because they don’t require changing bits and cutting heads multiple times a day. They also indicate that energy consumption is very low and labor costs are significantly reduced by using robotics.

plasma tunneling Doesn’t even generate drilling mud Which has become one of the biggest problems for construction companies. In particular, they point out that waste rock – mainly dust – produced by this technology can be reused and sold to other companies to build roads or make concrete. East. 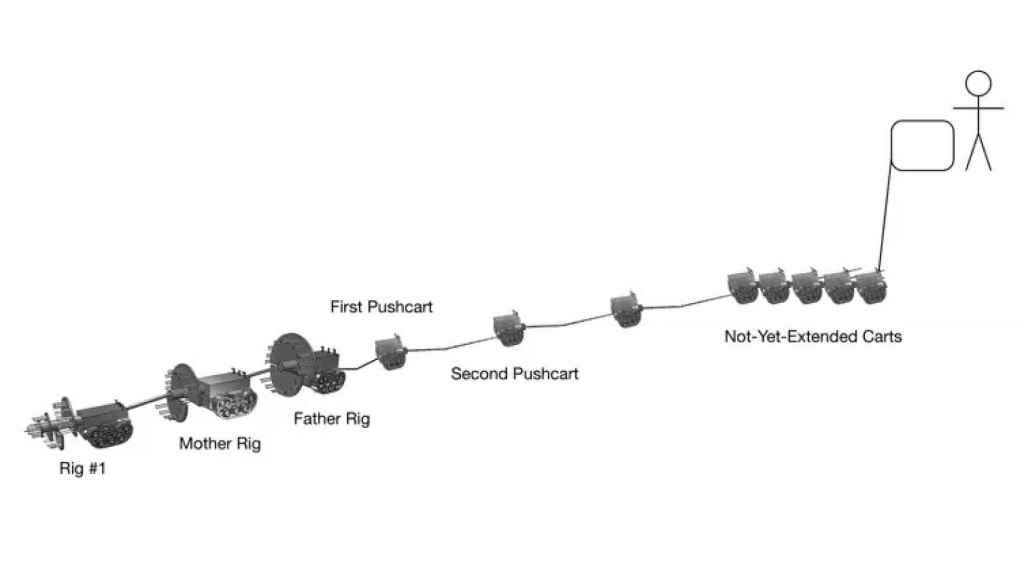 Regarding prices, and always depending on the type of rock they have to face, EarthGrid publishes that Each meter of excavation can cost around $300., which is 90% less than with conventional techniques. It costs them $300,000 per kilometer, or 98% less to climb it.